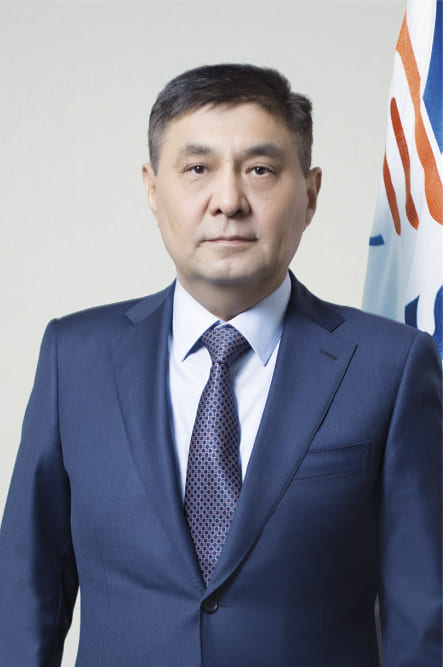 Сhairman of Board of Directors of “Samruk Energy” JSC

MESSAGE OF THE CHAIRMAN OF “SAMRUK ENERGY” JSC BOARD OF DIRECTORS

Today, more than 70 % of the Company’s generating facilities are coal-fired condensing power units. For this reason, despite the Company’s involvement in renewable energy projects, coal generation remains “Samruk-Energy” JSC key competence in years ahead. In this regard, as part of activities aimed at the development of generation, the main emphasis is to increase operating performance of existing facilities, including: reduction of production costs, efficient operation and repair of equipment, innovative development, business digitization, successful implementation of investment programs and enhancing of financial stability.

In the context of accomplishing tasks in these directions, the unit consumption of fuel and water costs for process needs were reduced at “Ekibastuz State District Power Plant – 1 named after B. Nurzhanov” LLP, resulting in savings of about 1 bln. tenge.

In 2019, the Company signed an energy service agreement with a domestic investor, a maximum energy saving and energy efficiency is expected to be achieved while providing lighting of mine workings and production sites of “Bogatyr Komir” LLP using artificial light sources. The expected economic effect is circa 207,8 mln. tenge annually.

The 2019 will also go down in the history of Kazakhstan’s power sector. The Company’s shareholder, “Samruk- Kazyna” JSC, closed a deal on acquisition of a 50 % equity stake in “Ekibastuz State District Power Plant-2” JSC from “Inter RAO” PJSC. As a result, an important energy asset has completely passed into the control of the Republic of Kazakhstan. For Kazakhstani side, the installation of the third 636 MW power unit as part of expansion and reconstruction is a priority. The implementation of this project will contribute to meeting the growing needs of Kazakhstan in electricity and electric capacity, while increasing its export potential.

As part of actions taken by the Company, at the end of 2019, the target values of the financial stability ratios Debt / EBITDA, EBITDA / Interest expense, Debt / equity, set out in the Debt Management and Financial Stability Policy were achieved and, accordingly, the green risk zone was secured.

The Company repaid “Moynak HPP” JSC foreign currency loan in the amount of 136,3 mln. USD ahead of schedule; the loan was previously received from the State Development Bank of China for the construction of a hydropower plant. The implementation of the transaction allowed “Samruk-Energy” JSC to substantially reduce the share of foreign currency loans in its loan portfolio from 17 % to 3 %, reduce the negative effect of currency fluctuations on the holding company’s financial performance and release the Shareholder’s corporate guarantee in the amount of 50 mln. USD, thereby reducing the amount of contingent liabilities.

The Company has projects, which are planned to be implemented in the medium-term such as: “Expansion and reconstruction of Ekibastuz SDPP-1 facilities (Restoration of Unit 1), “Expansion and reconstruction of Ekibastuz SDPP- 2 including installation of power unit No.3”, “Implementation of the project of transition to cyclical-and-continuous method for the extraction, transportation, blending and loading of coal at the “Bogatyr” open-pit mine (CCM)”, “Retrofit of Shardarinsk Hydropower Plant” project is nearing completion. In the renewable energy sector: “Construction of a 50 MW Yereymentau wind farm”, “Construction of a 60 MW wind farm in Shelek rural area of Almaty region”. I would like to highlight the key role of “Samruk-Energy” JSC, as the largest electricity supplier in Kazakhstani market, in the implementation of plans to build a low-carbon economy.

The Company will continue to make every effort to improve the corporate governance system in order to develop further, improve and increase transparency of its operations. It will keep streamlining its business processes, management system and improving all elements of production process on the path of confident and stable development of power holding company.