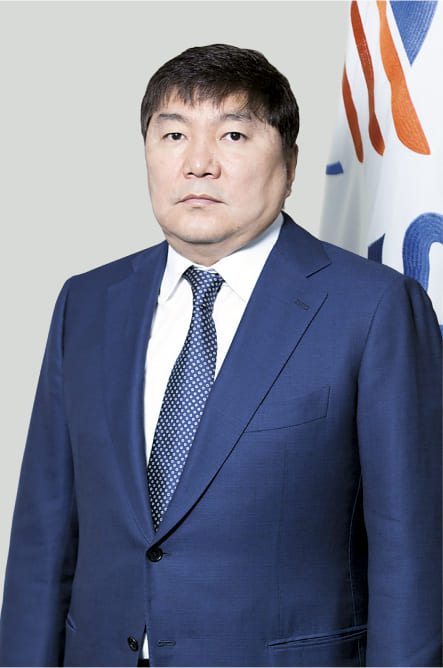 Сhairman of Management Board of “Samruk Energy” JSC

The 2019 was a productive year for the Company and was full of events that will remain in the history of Kazakhstan’s power industry development.

The operating profit across “Samruk-Energy” JSC group of companies in 2019 amounted to 243.7 bln. tenge.

The volume of electricity production by “Samruk-Energy” JSC group of companies amounted to 30,200.3 mln. kWh. 44,848 thousand were mined at coal mines, the volume of export to the Russian Federation has increased.

In 2019, Kazakhstan established the capacity market as an effective mechanism for providing the industry with a sufficient level of investment, which will favorably influence the market in the long term. The profit obtained by electricity producers is divided into two components – income from the sale of electricity (used to cover current expenses) and income from the provision of services to maintain the availability of electric capacity (used to repay principal and investments).

The fundamental retrofit of Shardarinsk hydropower plant in Turkestan region suffering from power shortages is nearing completion. The reconstruction will allow increasing the capacity of the hydropower plant to 126 MW , and new hydraulic turbines will allow boosting electricity production from 480 to 537 mln. kWh.per year.

In the Almaty energy complex, “Alatau Zharyk Company” JSC completed the project of transferring loads from the Gorny Gigant substation to upgraded Ermensay substation. As a result, the threat of emergencies and power outages in the southern capital was finally eliminated.

RE assets portfolio of the Company includes a 0,4 MW solar power plant, which was built in 2019 in the Almaty region. The project was implemented on the basis of infrastructure of existing 2 MW SPP in Kapshagai.

Implementation of the project of construction of a 60 MW wind power plant (WPP) including a possible increase in capacity up to 300 MW has commenced in the same region. It is expected that greenhouse gases will reduce to 206 thous. tons of CO2/ per year as a result of the launch of the renewable energy facility in Shelek corridor, and 89 thous. tons of specific fuel per year. Thus, the new RE facility will contribute to an increase in the production of “clean” electricity and the development of renewable energy sources in Kazakhstan.

The international rating agency Fitch Ratings affirmed “Samruk-Energy” JSC a long-term credit rating in foreign and national currency at the level of “BB”, the forecast is “Stable”; The assessment is based on the strategic importance of “Samruk-Energy” JSC for the state, which is expressed in financial support, as well as the Company’s strong market position. A loan agreement was signed between “Ereymentau Wind Power” LLP and EDB in the amount of 23.2 bln. tenge, which provides funding for the project “Construction of 50 MW wind farm in Ereymentau”.

To increase the volume of electricity sales and use of export potential, “Samruk-Energy” JSC entered the Central Asian electricity market. “Ekibastuz State District Power Plant-1” LLP and “National Power Grids of Uzbekistan” JSC signed an electricity purchase and sale agreement, which covers the supply of 1,01 bln. kWh electricity from June to December 2019.

The Company completed 3 projects as part of the implementation of Business Transformation Program in 2019: “Introduction of the new information technology management model”, “Category procurement management”, “Development of sales processes and introduction of trading processes”, which has no analogues in Kazakhstan.

The Company has reconsidered approaches to implementing Transformation Program. The focus is shifted towards addressing production objectives and ramping up production facilities. The Company created an updated portfolio of projects. It aims to achieve strategic goals, increase the value of the company and reduce operating costs.

In its activities, the Company follows the principles of social responsibility of business and implements the global sustainable development goals within its competence. We pay a considerable attention to the implementation of social policies, improving the working conditions of employees, promoting the well-being of employees and residents of the regions where we operate, ensuring workplace safety, preservation of the environment, and increasing the share of local content in procurement.

The Company allocated more than 7.1 bln. tenge in 2019 for occupational health and safety and environmental protection initiatives.In 2019, “Samruk-Energy” JSC signed a Statement of Support for the “Women’s Empowerment Principles”, developed as part of the partnership between UN Women and the United Nations Global Compact. This is one of the results of the the Company and the European Bank for Development and Reconstruction joint project on the development of human rights policies, the promotion of gender equality and women empowerment.

In order to develop and support the young generation, activities aimed at supporting young employees were conducted throughout 2019 within the framework of the Year of Youth announced by N.Nazarbayev, the First President of the Republic of Kazakhstan – Yelbasy.

The Youth Council of “Samruk-Energy” JSC group of companies was established, youth forums, internships were held as part of digitization program, and a talent pool comprising highly qualified ambitious young employees from different regions is formed.

The young generation will become the driving force behind the Company’s development, an active resource in accomplishing strategic goals.