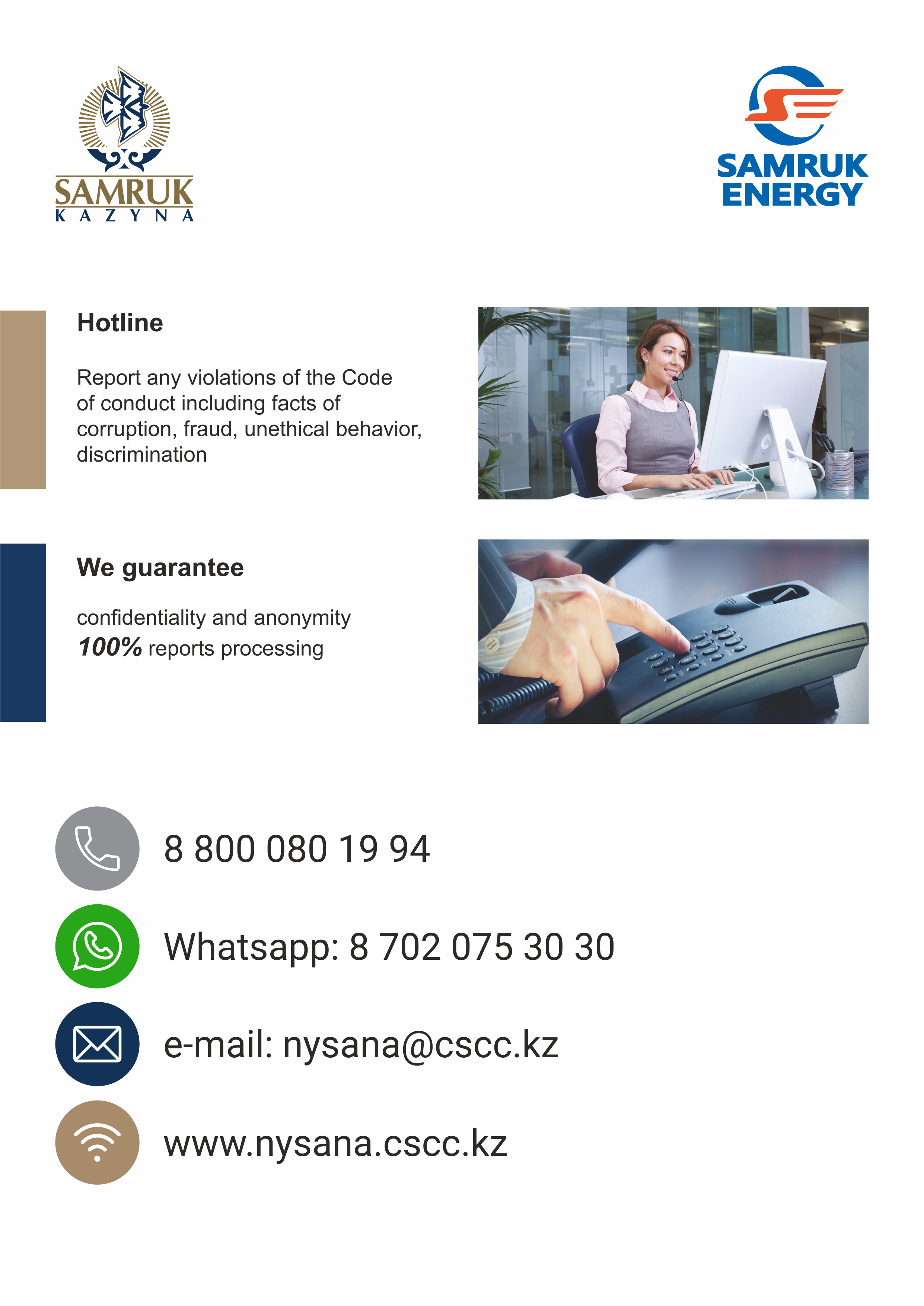 The Company maintains high standards of business ethics, transparency and legality that are independent of business customs and other business conditions in a particular jurisdiction.

The Service aims at creating a compliance system at the Company that meets international standards and best practices in this field. Particular attention is paid to meeting the requirements of the Republic of Kazakhstan law “On fight against corruption”, recommendations of international organizations and international studies of the compliance function.

As part of the development of a compliance system, the Company strives to maintain a high level of efficiency of its work, to be business-oriented and proactive in risk management, taking into account the large-scale strategic goals of the Company.

The Republic of Kazakhstan law “On fight against corruption” is the main regulatory document, documents that regulate anticorruption requirements within the Company are the Code of Business Conduct, Compliance Risk Management Policy, the Anti-Fraud and Corruption Policy, Corporate Conflicts and Conflict of Interest Resolution Policy, Initiative Information Sharing Policy.

The Company in these documents publicly declares zero tolerance for corruption in any form and occurrence both in everyday life and during implementation of strategic projects. Moreover, the procedures for ensuring the implementation of anti-corruption legislation are set out in the regulations of the Company’s business processes.

Adhering to recommendations of the regulatory authorities and exploring the best international practices in the development of corporate anti-corruption compliance programs, the Company has created its approach based on the following principles:

✔ Аctive involvement and support by management in the development of a compliance system. The Company’s Board of Directors of the Company regularly reviews reports on the implementation of the compliance program.

✔ The Company regularly conducts activities aimed at identifying and further updating of corruption risks. The Company develops and implements anti-corruption procedures that meet the level and nature of the identified risks, improves and updates internal policies and procedures.

✔ The Company implements and supports a training program for employees on principles and standards of compliance with anti-corruption legislation.

✔ The Company monitors the effectiveness of the implemented procedures to prevent corruption.

✔ To reduce the risk of the Company’s involvement in corruption activities, the Company developed Due Diligence procedures for both counterparties and individuals.

✔ Corruption risks in business processes are regularly evaluated at the Company.

✔ A single “hot line” operates at the Company, which is serviced by an independent company Deloitte.

In 2019, the Company implemented the following projects and initiatives as part of the development of the compliance program and strengthening the compliance culture:

✔ Corruption risks in the processes were evaluated across “Samruk-Energy” JSC group of companies.

✔ Risk assessment was conducted in 2019 at all key subsidiaries and affiliates (coverage of 76 %) and 100 % of divisions of “Samruk-Energy” JSC.

✔ The Board of Directors of the Company approved the Action Plan for mitigating corruption risks based on the results of the assessment; its execution is monitored on an ongoing basis.

✔ Training was conducted for PR employees of subsidiaries and affiliates of the Company on the topic: “Compliance ideology in the life of the company and its employees”

✔ Corporate media has been actively covering compliance issues. News, articles, event announcements, training video clips, information about possible risks and corruption scandals (in world and in the country), as well as the need to report violations of the law and internal regulations to the “hot line” were posted on the internal corporate portal during the year.

✔ Anticorruption provisions stipulating obligations of suppliers to comply with the laws of the Republic of Kazakhstan on anti-corruption issues, as well as obligations on inform the customer of any alleged and actual violations of anti-corruption laws and procurement rules through the hotline were included in standard agreements across “Samruk-Energy” JSC group.

✔ In order to implement the project “Diagnostics and development of corporate culture”, corporate values of the Company were developed. The Board of Directors approved amendments to the Code of Business Conduct.

✔ In order to create an anti-corruption culture and promote zero tolerance for any form of bribery and corruption, the Compliance Service of the Company, together with the Anti-Corruption Agency of the Republic of Kazakhstan, organized a training on “Combating corruption at quasipublic sector entities” for employees of the Head Office and SA at the head office.

In order to create an effective system for managing conflicts of interest, as well as determining requirements for the behavior of employees, compliance with which allows reducing risks of decision-making under the influence of personal interests and relationships at the Company, a number of measures are being taken.

In 2018, the Company’s Board of Directors approved the new version of the Policy for the Settlement of Corporate Conflicts and Conflicts of Interest of “Samruk-Energy” JSC. Employees who hold executive positions are required to set an example of law-abiding and ethical behavior and actively support the implementation of the Policy. At employment, all employees learn about this document, fill out and sign Personnel department form. In 2019, the Board of Directors introduced changes to the Policy and supplemented the procedure for declaring a conflict of interest. Employees including department heads and those who are on higher positions annually fill out a Conflict of Interest form. Preliminarily, in order to eliminate corruption risks and conflicts of interest during the recruitment process, candidates for vacant positions at the Company and senior positions at subsidiaries and affiliates (according to the list of positions) are checked for affiliation with officials of “Samruk-Kazyna” JSC group of companies.

The Compliance Service regularly monitors situations for conflicts of interest; 1 potential conflict of interest was settled in 2019.

In 2019, 100 % of “Samruk-Energy” JSC employees learned about the Anti-Fraud and Corruption Policy. The results of testing the knowledge of the Policy demonstrated 100 % coverage of employees’ knowledge in this area.

The Company employees are checked for knowledge of requirements of anti-corruption law and internal documents every year. In 2019, the Company’s Compliance Service conducted 6 internal investigations and 10 compliance checks on appeals received through the “hot line” and violations of requirements of internal regulatory documents and legislation at subsidiaries and affiliates. Following the inspections and investigations, activities on mitigating risks were carried out at subsidiaries and affiliates, as well as disciplinary actions were taken against executives and responsible officers. According to the 2019 results, 1 case of a corruption offense in the actions of the head of a subsidiary was reported across the group of companies, the results of an internal investigation were sent to the authorized body.

To eliminate corruption risks and for the purpose of transparency of the process and compliance with the principles of meritocracy, the Compliance Service is actively involved in the work of competitive commissions held by the Company and in the approval of senior employees of subsidiaries and affiliates. The Compliance Service monitored changes in the anticorruption legislation on a regular basis in order to respond in a timely manner and to comply with requirements. In order to prevent corruption, the Company prepared the Action Plan for fighting corruption at “Samruk-Energy” JSC. According to the 2019 results, all planned activities were completed within the established deadlines and in full.